Things you Truly Long for in the Deepest Part …

Working toward peace in the Middle East

My name is Mindi, and I work as a Principal in a large preschool for children with special needs. I’d like to share how the Synergy Basic created incredible possibilities for me around my health and well-being.

Five years ago this month, I was diagnosed with breast cancer and told I had 18 months to live. After a double mastectomy, I underwent a grueling regiment of chemotherapy, followed by radiation. While most people lose weight from chemotherapy, my cocktail was filled with steroids, which helped me to balloon up to more than 250 lbs. In addition to losing my hair, I developed Type 2 diabetes and became insulin dependent. Between the weight, the cancer, and the diabetes, my health deteriorated to the point where I developed severe neuropathy in both feet and needed a walker to take more than a few steps. On a scale of one to 10, I rated my health and well-being as a “one.”

When you’re so far gone, you don’t even dream of making a change. When I looked up at the mountain of my poor health, I had no idea how to make even the tiniest step forward. And I was terminally ill, so it didn’t really matter anyway.

This was an eye opener for me. I realized that I was using my poor health as an excuse to do nothing, aspire to nothing, and hide out from many other things. I was a VICTIM! I had never thought of my health in this way before or imagined that I had a say in my future health status. What had my own thoughts about my health kept me from attempting or achieving? Who did it keep me from becoming? Something in the way I viewed my health began to shift.  For the first time in many years, the possibility of good health became a faint but persistent ache.

Still, there were so many obstacles in the way, some which I knew and some that I didn’t even know that I didn’t know. When I took the Basic this past July, I became aware of many roadblocks that continuously sabotaged my pursuit of good health. Of course I knew I hated exercise and eating healthy foods, but the Basic revealed many blind spots – things that others could see about me, but I, myself, was totally clueless about. Through the many exercises and guided activities in the Basic, I experienced a profound realization of some of the things which consistently kept me from even attempting a healthier life. 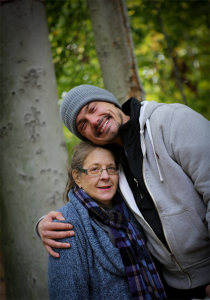 Since I finished the Basic course, I’ve begun to pursue and achieve a significantly healthier life. I exercise daily, and I no longer eat sugar, chocolate, ice cream or soda – my four food groups. Instead, I eat and enjoy healthy foods, such as salads, fruit, and vegetables. As of this past Saturday, I’ve lost more than 57 lbs. In this last week alone, my insulin requirements have dropped from 83 units per day to zero! That’s right. My diabetes is now totally controlled by diet and exercise! Even my doctor can’t believe it. And I don’t use a walker to get around anymore. In fact , two weeks ago, I went with some dear friends to an adventure obstacle course and where I climbed a 20 foot high telephone pole!!!

Because all of the spokes on a wheel are interconnected, when my health and well-being began to improve, my life changed on so many levels. I still have a long way to go to achieve all of my health goals, but those who known me for years claim that I have become unrecognizable!!! I know that I am well on the road to becoming the healthiest I have ever been in my adult life!

No self help groups, no diet groups, no hypnotists, no bariatric doctors, no therapy or prayers had helped me to gain control and begin my long and arduous journey. Instead, surprising ME more than anyone else, the transformational, experiential learning I had had in the Basic, gave a me the courage, insight, strength, and the ability to make a breakthrough in the area of my life where NO possibility of improvement was even conceivable.

I don’t know what area in your life you are seeking a breakthrough in, but I can 100% insure you that, if this growth was available to me, even in the condition I was in, that anything you truly want in your life is possible if you take the Synergy Basic course. Two evenings and two full days can totally change your life and have you move forward in the things you truly long for in the deepest part of your heart and soul!