The Power of Context

When I was four I was abandoned.

Not how you think. I was loved deeply by my parents, and they gave me the best upbringing I could have ever asked for. But one day I got sick. Some kind of inner ear infection that put me in the hospital for two weeks.

When they brought me to the hospital I didn’t know what was going on. I do remember them saying I had to go with the doctor. When I asked them if they were coming with me they said they couldn’t. When they recounted the story during my adulthood, they said I had looked at them briefly, like I was hurt, then took the doctor’s hand, turned around, and left without saying a word.

Of course I barely remembered any of this. I only heard about it 20 years later. But I always knew that there was some significance to what happened. Something about how I felt unwanted. That my only source of warmth and comfort in the world – my loving parents – were not there for me. That I was rejected, alone, abandoned, not good enough. Unwanted.

I realized that the only thing that had ever held me back was myself, and from that moment on I could be different.

It took me many years to realize how that had affected my life. This is what my ‘context’ is – the story that I have been subconsciously telling myself for all these years: no one wants me.

It was not an easy journey, but when I realized it, it felt like I’d been hit in the gut. I realized that it was the common thread that tied together so many bad experiences in my life. In large part it was because I was spending so much energy subconsciously collecting evidence to prove to myself that it wasn’t true, that people did want me, that they did love me. It was the main source of problems in my relationships, even after they ended, because even if I was the one that felt the need to move on, if I didn’t have my former partner come back and beg me to take them back, then that proved that my context was correct. After all, if they’re not moving heaven and earth to be with me, it’s because they don’t want me, right? And from there came high expectations and a sense of entitlement that didn’t help any relationships. This even explained things like procrastination and my perfectionism at work – if I did something that wasn’t the greatest thing they’d ever seen, they’d be disappointed and wouldn’t want me anymore! And so my sense of validation came from the outside, which is a common story but, in my case, I managed to figure out the ‘why.’ It was difficult to sort through all the times in my past when I started to realize how I hurt others, or was hurt, because of my own ‘false self’ actions. Because, after all, when I acted entitled in relationships, I felt that there was something wrong with what I was doing. It didn’t sit well with me and felt false. I knew that I was bigger than the petty fight I just had with my girlfriend each time it happened. Seeing decades of interactions through this new lens was heartbreaking.

But amidst all this was the greatest hope. After I was done beating myself up, I realized that the only thing that had ever held me back was myself, and from that moment on I could be different. I could be my real self, untarnished by my context, and create something beautiful, authentic, vulnerable, and yet powerful in all my relationships. I felt like I was me, without the mask, without the shield. 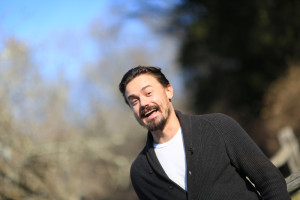 In the month following this realization, I got back in touch with half a dozen people from my past that I was terrified of ever speaking to again. At best the conversation would be awkward, I thought. At worst, they would respond with hatred. But that’s not what happened at all. The new way in which I spoke to them – vulnerable and authentic – somehow made them open up too. Today I count many of them as good friends again, with a connection that’s deeper than we ever had in the past.

Because of the work and incredible coaching at Synergy I was able to reach this new understanding in such a way, that even current friends would speak to me and notice that something changed. With a smile on their face, they’d say “I really like this new version 2.0 of you.” The relationship with my colleagues changed completely, because my work was more than good enough, and the only person who thought otherwise was me. Both the fear of failure and fear of success became a thing of the past.

Most importantly, I forgave my parents, and they forgave me. We didn’t need to because no one did anything wrong, but the understanding of what happened and being able to let go of it paved the way for a love that’s deeper than anything we’ve ever had. It’s a funny thing how out of that darkness came the brightest light, the realest love, and the greatest hope for the future.

Here’s to finding your own context.